RCB mauled RR by nine wickets after restricting the Shane Watson-led side to a paltry 130.

Bengaluru: Humiliated in their previous face-off this season, table toppers Rajasthan Royals (RR) will be desperate to seek revenge against a resurgent Royal Challengers Bangalore (RCB) in the Indian Premier League (IPL) 2015 match at Banglore on Wednesday. IPL 2015 Highest run-scorer: List of best batsmen in IPL 8

In the earlier meeting between the two teams last week, RCB mauled RR by nine wickets with 23 balls to spare after restricting the Shane Watson-led side to a paltry 130. And come on Wednesday, the crushing defeat would be high on the minds of Rajathan Royals players.

Rajasthan Royals are presently sitting atop the table with 11 points from eight games with five wins, two loses and one no result. RCB, on the other hand, are lying fourth with six points from as many games. After registering five consecutive wins, Rajasthan Royals suffered two back-to-back defeats and would be keen to return to winning. IPL 2015 Highest wicket-taker: List of best bowlers in IPL 8

For Rajasthan Royals, Ajinkya Rahane, the leading run-getter this season, and Australian Steve Smith has been in fine form with the bat and the team would looking upon the duo to post a big total on Wednesday. IPL 2015 Leading fielders: List of Best fielders in IPL 8

On the bowling front, 43-year-old leg-spinner Pravin Tambe has impressed all and sundry and has picked up six scalps so far this season. With the presence of Chris Morris and James Faulkner, Rajasthan Royals pace department also look in safe hands. IPL 2015 Most 6s and 4s: List of most dangerous batsmen in IPL 8

For RCB, it has been a mixed bag tournament so far, recording three wins and as many loses. But after a sedate start, RCB returned to winning ways with two consecutive away wins against Rasjasthan in Ahmedabad and Delhi Daredevils at Feroz Shah Kotla. IPL 2015 most dismissals by wicketkeeper: List of best wicketkeeper in IPL 8

But a dismal record at home could a major concern for RCB going into Wednesday’s game. RCB has so far failed to take the home advantage. They lost all three matches against Sunrisers Hyderabad, Mumbai Indians and Chennai Super Kings before their home crowd. IPL 2015 schedule: IPL 8 match time table with venue details

RCB would be high on confidence after registering a comprehensive 10-wicket win over Delhi Daredevils in their last match. Against Delhi the other day, all departments of the game clicked in unison for RCB and skipper Virat Kohli would be hoping for a consistent performance on Wednesday. IPL 2015 Points Table & Team Standings

With the likes of destructive Chris Gayle, Kohli, A B de Villiers up their ranks, RCB’s boasts of a formidable batting line-up. Gayle and Kohli have had a slow start to this year’s campaign but have gained momentum with time. Kohli in fact returned to form with two half centuries in the last three games. IPL 2015 Previews

On the spin front, RCB’s leading wicket-taker this season with 10 scalps, Yuzvendra Chahal, will be a hard nut to crack. Indian Premier League (IPL) 2015: Complete coverage 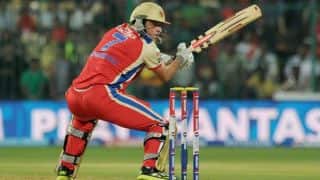