Having won three games each, Chennai Super Kings and Kings XI Punjab will square off at the MA Chidambaram Stadium on Saturday.

After suffering their first defeat in the Indian Premier League (IPL) 2019, Chennai Super Kings (CSK) return to their fortress as they take on Kings XI Punjab (KXIP) at the MA Chidambaram Stadium in the 18th match on Saturday in Chennai.

While the MS Dhoni-led unit is coming into this game on the back of a loss against was the Rohit Sharma s Mumbai Indians (MI), KXIP, led by Ravichandran Ashwin, a former CSK player, will be fresh from their stunning win against Delhi Capitals (DC). The Punjab unit were almost down and out before Mohammed Shami and Sam Curran turned the tables on Shreyas Iyer and Co. to snatch a win from the jaws of defeat.

Although both the teams have played four matches each and won three each, KXIP are ahead of CSK in the points, courtesy a better net run-rate. A win in this game will take either of them at the top of the points table with 4 wins and 8 points against their name.

Weather: Sunny with a high of 35 degrees Celsius.

Dhoni admitted that CSK have lost quite a few players due to injury or otherwise before or during this year’s tournament and hence, left with a limited resources to deal with. The form of the openers – Ambati Rayudu and Shane Watson – also remains a concern. However, if there was one man who would know how to get the best out of the limited resources, it is Captain Cool. (ALSO READ: IPL 2019: How have India’s World Cup probables fared?)

While he may not make a wholesale changes in the playing XI, CSK may strengthen their pace attack by including the New Zealand pacer Scott Kuggeleign in the playing XI. The availability of Faf du Plessis, Sam Billings and Murali Vijay is also a plus and Dhoni may want to include either of them to add more depth to CSK batting. (ALSO READ: MS Dhoni blames fielding errors and death-overs bowling for defeat)

R Ashwin is not someone who will shy away from making changes, even if it means dropping someone like Chris Gayle from the playing and picking Curran ahead of him. The move paid dividends in the last game. Expect him, not to field the same playing XI despite winning the previous game. Plus, he knows a thing or two about the Chepauk having played for Tamil Nadu. So, the changes in the team, according to the nature of the wicket, is also a factor. (ALSO READ: I don’t do anything that is illegal, have no regrets on Mankading Jos Buttler: R Ashwin)

The Chepauk wicket has shown that it assists the spinners and hence, Ashwin may drop Hardus Viljoen and keep Mujeeb Ur Rahman in the XI. If that happens though, then Ankit Rajpoot may come in place of Hardus Viljoen. Chris Gayle too make a comeback in the playing XI. 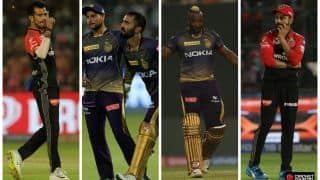