Two weeks into the IPL, here's a check on how India's ODI regulars have fared so far.

Sixteen games into IPL 2019 and the performances of India’s star players remains a mixed affair; some have hit their straps, some have been quixotic and some have not fared well at all.

India’s captain Virat Kohli spoke before the start of the season of how IPL performances will not dictate selection for the 2019 ICC Cricket World Cup, but there is still immense scrutiny on a few players ahead of the April 23 deadline to submit teams for this summer’s mega-event.

Here’s a look at how India’s likely World Cup squad of 15 has fared in this IPL season so far:

The top-ranked batsman in Tests and ODIs has hit a low phase, as as his team Royal Challengers Bangalore. Kohli has gotten off to a very poor start as batsman and captain, with a best of 46 and two single-digit scores. In his last innings, Kohli was bowled through the gate by legspinner Shreyas Gopal. Bangalore have lost all four games for their worst start ever. (READ: Have to keep believing that we can turn things around: Virat Kohli)

Getting off to a slow starts is not new for Mumbai Indians’ captain, but four innings with a best of 48 is a bit of a concern. Mumbai have won two of four matches, and could do with some inspiration from Rohit who this season has decided to open the innings.

Statistically Delhi Capitals’ second most successful batsman, but for a struggling franchise the expectations are greater. Dhawan’s strike-rate has been spoken of by Delhi coach Ricky Ponting – who raised the matter after two games – and mentor Sourav Ganguly – who asked Dhawan to bat faster – amid a struggle to dominate during the Powerplay overs.

Dhawan’s two main scores came in the first two games when he made 43 off 36 balls and 51 off 47 balls. Against Mumbai, he batted into the 16th over and versus Chennai he was dismissed in the 18th over. Scores of 16, 30 and 12 followed. (READ: Delhi Capitals lose to Sunrisers Hyderabad)

Adding to his poor run of form for India last month – which saw him lose his place in the ODI team – Rayudu is perhaps the worst off right now. Scores of 28, 5, 1 and 0 in four games for Chennai Super Kings cut a poor impression of the man who until not long ago was India’s preferred No 4 for the World Cup.

In his last three innings for Chennai, Rayudu has faced 14 deliveries.

Leading defending champions Chennai to a 3-1 record so far in the season, Dhoni has been a captain unparalleled owing to his tactical decisions – choosing four spinners on a rank turner, getting Harbhajan Singh to bowl in the Powerplay, backing Deepak Chahar for four straight overs – and he is the only Chennai player to top 100 runs.

Twice Dhoni has played match-winnings innings. Against Delhi, his unbeaten 32 off 35 on a tacky surface helped get Chennai over the line and then against Rajasthan, Dhoni helped revive the score from 27/3 with his highest IPL score ever – 75 not out off 46 balls – and scored 35 of the 60 runs CSK managed in their final three overs.

One half-century in four innings. Began with 13 not out off 19 balls in an eight-wicket win on a spinning track in Chennai. In the win over Delhi, Jadhav made 27 off 34 balls. Against Rajasthan Royals he smacked his first two deliveries for four and then nicked the third to the wicketkeeper.

In CSK’s first loss of the tournament – to Mumbai – Jadhav top-scored with 58 off 54 balls in what was his most fluent innings by far.

His offspin has not been called on.

Shankar’s batting has been his strongest suit, not surprisingly. He batted at No 3 in Hyderabad’s first game and scored 40* off 24 balls. In the next, he batted at No 4 and swatted 35 off 15 balls to hasten a successful chase of 199. In the mauling of RCB Shankar was back at No 3 and made nine of three. In the win over Delhi he again came in at one-down but on a sluggish track, struggled in getting 16 off 21 balls.

His bowling has been ineffective.

One exceptional match to help Mumbai beat Chennai by 37 runs showcased the best of Pandya. With the bat, he smacked an unbeaten 25 off just eight balls to get Mumbai to 170/5 after a sluggish first half and then with the ball he claimed the wickets of Dhoni, Ravindra Jadeja and Deepak Chahar to end with 3/20 in his four overs.

Barring a duck in Mumbai’s first game, Pandya has scores of 31 off 19 balls and 32 not out from 14. His fielding, as always, has been electric.

Pant has batted as you expect him to in the IPL: bullish, brazen and at times recklessly. The high came immediately. In Delhi’s opening game, Pant blitzed an unbeaten 78 off 27 balls to set up a 37-run win over Mumbai. Of those 78 runs, 68 came on the legside in a display of nonchalant hitting, with Pant repeatedly walking across the stumps to flick, heave and disdainfully swat the pace bowlers away.

Against Chennai, Pant smashed 25 off 13 balls but failed to curb his enthusiasm. Against Kings XI Punjab, having just swung a six, Pant heaved again and was bowled. That dismissal cued a collapse of seven wickets for eight runs. In Delhi’s latest game, Pant lofted Mohammad Nabi to long-off to add to a poor start.

His wicketkeeping, refreshingly, has been sharp.

A very surprising start to the IPL for Bhuvneshwar, the spearhead – and now captain, with Kane Williamson injured – of Sunrisers Hyderabad. Three wicketless and expensive games in a row and then figures of 2/27 in SRH’s win over Delhi on Thursday.

The noticeable factor has been Bhuvneshwar’s inefficiency in the backend of innings. In his franchise’s first two games, Bhuvneshwar conceded 72 runs at 18 per over. In the massive win over Bangalore he bowled two overs in the Powerplay for 14 runs and then returned to concede 11 in the 13th. That was Bhuvneshwar’s last over of the game.

The spark returned at the Feroz Shah Kotla, where he took his first wickets of the season but still went for 16 in his last two overs. Will World Cup teams have taken note of Bhuvneshwar’s troubles in the death overs?

Bumrah remains Mumbai’s bowling spearhead, and his 3/20 in the narrow win over Bangalore was testament to his death-overs skill. After being hit by Virat Kohli for three fours in his first over, Bumrah came back to concede eight runs in his last three overs while taking three wickets.

He’s gone wicketless in the last two matches but has conceded less than seven runs an over.

Not always consistent in T20 cricket, Shami is currently Kings XI Punjab’s second-highest wicket-taker. But twice he has concede over 40 runs,

Against Kolkata Knight Riders he was robbed of Andre Russell’s wicket – he came around the stumps and produced a pinpoint yorker – because his skipper R Ashwin didn’t check how many fielders he had inside the circle. Given a life, Russell hit eight successive boundaries in a stunning display of power hitting in which Shami was taken apart.

His best display came in the stunning win over Delhi, in which he triggered a collapse of seven wickets for eight runs by bowling Pant. Barring the assault by Russell, Shami has accurately produced several noticeable yorkers in these four games.

Like Bhuvneshwar, Kuldeep has struggled to make an impact so far. He’s gone wicketless in two games for Kolkata, and in the one match he took wickets his economy was 10.25

In the opening game, Kuldeep conceded 18 runs in two wicketless overs. In the next, 32 from four without success. Then against Delhi he got two wickets but conceded 41 in four overs. Of those, 20 came in one over and 13 in another, plus Kuldeep dropped a tough return catch.

Chahal has the Purple Cap for most wickets so far in the IPL, which is the only positive for Bangalore. His four wickets in the loss to Mumbai were testament – once again – to his craft and spirit, while against Rajasthan Royals his excellent 2/17 in four overs should have fetched the franchise a win.

Potentially the 15th man in India’s World Cup squad given that the team will likely want a third opener, Rahul is another top-order batsman who has yet to hit top gear.

The bulk of his runs came in one innings – 71 not out off 57 balls to steer Punjab to an eight-wicket win over Mumbai. Otherwise he has been indifferent, with score of 1, 4 and 15.

As often the case with Rahul, shot selection is the problem: one waft outside off stump edged to the wicketkeeper, an airy drive in the air to mid-off and a late drive to an inswinger. The one time he’s applied himself, Rahul walked off unbeaten in a KXIP win. 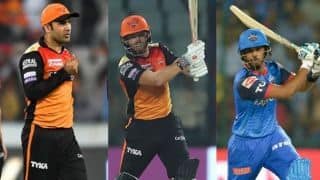 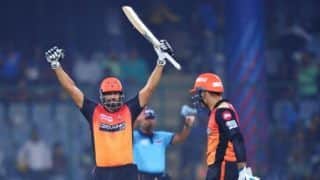