Jaipur: Out of favour India batsman Yuvraj Singh went unsold, while West Indians Shimron Hetmyer and Carlos Brathwaite bagged hefty deals in the first round of bidding at the 2019 Indian Premier League players’ auction on Tuesday.

There were no takers for 37-year-old Yuvraj, who was a sought after player in the IPL for a long time and during his prime, attracted a Rs 16 crore bid. He entered into the auction with a base price of Rs one crore and could still find a buyer later in the auction if he is among the unsold players brought back into the pool by the franchises.

Yuvraj going unsold was not particularly surprising as he endured a lean run in the 2018 edition after Kings XI Punjab (KXIP) bought him at a base price of Rs 2 crore before releasing him in November.

His teammate Brathwaite, the star of the 2016 World T20, was sold to KKR for Rs 5 crore after a bidding war between the Dinesh Karthik-led side and Kings XI Punjab. The all-rounder had entered the auction with a base price of Rs 75.

Another West Indian to get an attractive deal was wicketkeeper Nicholas Pooran. The 23-year-old, who came with a base price of Rs 75 lakh, went for Rs 4.20 crore to KXIP. He is a T20 find and is yet to play Test cricket 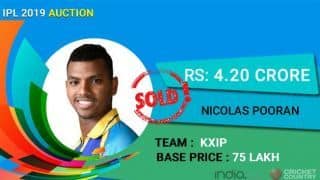