As he shapes to make a comeback in Australia‘s Test team for this summer’s Ashes in England, the fast bowler James Pattinson has been endorsed by his state coach for a match-winning role but with a reality check.

Former Australia allrounder turned Victoria coach Andrew McDonald has worked closely with Pattinson as he returned from another injury recently to help take his state side to the Sheffield Shield title, and believes that Pattinson could prove a viable option for the Ashes but may not last more than two Tests.

Having undergone back surgery in November 2017 after a series of injuries, Pattison returned to Shield cricket a year later and in his first match for NSW made a strong start with three wickets at the MCG. He took nine wickets in four matches before the Big Bash League break, and then suffered a side strain while playing for Brisbane Heat.

Pattinson returned to Shield cricket and helped demolish New South Wales with five wickets, and then in the final against the same opponents he once again starred to help bowl Victoria to the title.

This has led McDonald to tip him for success in England should Pattinson earn a recall to Australia’s Test squad, but with a cautionary view.

“I think he’s a two-Test player, but he could win you those two Test matches,” he said on SEN radio’s Whateley program. “When he plays, Australia’s odds increase greatly in terms of winning the Test match. But we can’t get overexcited in terms of what his body can cope with. We played him seven games this summer, 150-odd overs in seven games and really managed him throughout the summer.”

Pattinson, who played the last of his 17 Test matches in 2016, took 26 wickets at 18.92 in the Sheffield Shield and added to his hopes of a comeback. The 28-year-old will return to Nottinghamshire, for whom two summers ago he claimed 32 wickets at 12.02 in five County Championship matches.

Australia’s Test attack has in recent times featured Mitchell Starc, Pat Cummins, Josh Hazlewood and Jhye Richardson and this puts Pattinson behind them at fifth place. McDonald feels that he could be a big threat on England’s livelier surfaces.

“I think he would be an intimidating factor for the English batsman to overcome,” he said. “If the conditions are right and the game is a quick game in terms of wickets falling regularly because of the surface (is) a little bit green, which I’m predicting England may do in some Test matches, I think you can go in with three (quicks, including Pattinson) and one (spinner). Because the length of the game would potentially only be three-and-a-half or four days.”

McDonald, however, warned against rushing Pattinson back into flat pitches where he would have to try harder to get bounce.

“If he has to (bowl) heavy overs on flat surfaces, I think that’s an accelerated process to potentially injuring him again,” he said. 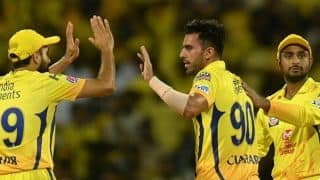