Kieron Pollard and Lendl Simmons fought hard, but in the end the 236-run target set by Royal Challengers Bangalore (RCB) proved to be 39 runs too much for Mumbai Indians (MI) in Match 46 of Indian Premier League (IPL) 2015 at Wankhede, Mumbai, on Sunday. RCB are now No. 4 on the points table, while MI have dropped to the No. 6 position with a rather poor net run rate. Live Scorecard: Mumbai Indians (MI) vs Royal Challengers Bangalore (RCB), IPL 2015 Match 46

Parthiv Patel showed his new-found loved for Australian left-arm pace bowlers named “Mitchell” (remember his assault on Mitchell Johnson recently?) as he took on Mitchell Starc early to give MI a good platform. He scored a rapid 19 off 11 balls before being run out brilliantly by a combined effort of Virat Kohli and Dinesh Karthik. Rohit Sharma came in at No. 3 but was unable to do much, mis-hitting a slower ball from Harshal Patel to Mandeep Singh for 15 off 13. Updates: Mumbai Indians (MI) vs Royal Challengers Bangalore (RCB), IPL 2015 Match 46

That brought in Pollard to join Simmons, and for the first time in the match MI would have felt they were in with a faint chance of pulling the chase off. Pollard used his long handle with ferocious effect, hitting 49 off 24 with six fours and two massive sixes. Once he was out though, RCB were never in the game. IPL 2015 Points Table & Team Standings

Hardik Pandya hit a six in his four-ball eight before running down the track to Yuzvendra Chahal and missing. Ambati Rayudu came out with a lot of intent as well, hitting two sixes in his four-ball 14, but was caught brilliantly by AB de Villiers off Harshal. Harbhajan Singh was dropped early, but hit the next ball to Kohli to give Starc his first wicket. In the end there was nothing MI could do despite nearly scoring 200. IPL 2015 schedule: IPL 8 match time table with venue details

Earlier, a monumental 133 not out from AB de Villiers and a skilful 82 not out from Virat Kohli helped RCB thrash the hapless MI bowlers to all ends of the Wankhede as RCB scored a massive 235 for one. Chris Gayle’s early dismissal for 13 — he managed to hit a four and a six — did not hamper RCB too much. IPL 2015 Leading fielders: List of Best fielders in IPL 8

MI could have been in a far better position early, but both Gayle and Kohli were dropped in the same over — bowled by Mitchell McClenaghan — to provide RCB with a couple of early reprieves. Rohit Sharma and Harbhajan Singh were the men guilty of the lapses, though Gayle’s dismissal did not hamper MI too much. Kohli, though, was a different matter entirely. IPL 2015 most dismissals by wicketkeeper: List of best wicketkeeper in IPL 8

If MI were happy to see the back of Gayle early, their joy would have turned to ashes with the emergence of de Villiers. The South African No. 3 seemed to think he was facing the West Indies — against whom he scored the fastest ODI fifty, hundred, and one hundred and fifty — and ended up playing one of the most thrilling innings yet in IPL 2015. He brought out all the insane shots in his repertoire; the one-handed sweep and the inside out cover drive he played off Lasith Malinga in the 19th over of the innings perfectly summed up his innings. IPL 2015 Highest run-scorer: List of best batsmen in IPL 8

Kohli played his part at the other end, scoring a composed fifty and feeding de Villiers with as much of the strike as he could. He made full use of the early life he got, and ensured that the poor deliveries were dispatched. His innings was completely overshadowed by de Villiers’ but he played a tremendous innings as well. Kohli and de Villiers added a sensational 215 runs — the highest partnership in T20 history — to absolutely decimate MI. IPL 2015 Most 6s and 4s: List of most dangerous batsmen in IPL 8

Earlier, Kohli won the toss and elected to bat first, as he moved in with an unchanged squad. Rohit Sharma made a couple of changes to the side, bringing in Lasith Malinga for Merchant de Lange and Jasprit Bumrah for Vinay Kumar. Indian Premier League (IPL) 2015: Complete coverage

IPL 2015: Chennai Super Kings vs Rajasthan Royals at Chennai, pick of the tweets 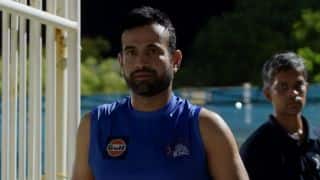