Both teams have batting frailties as exposed in recent months.

Pakistan coach Mickey Arthur identified the need for his batsmen to post good totals as a key factor in their three-Test series against South Africa, starting at SuperSport Park in Centurion on Wednesday.

“The one thing we do know is that we can get 20 wickets comfortably. Our challenge is to get to 350-400 (runs),” Arthur said in a pre-tour interview.

It is a refrain that could be echoed by Ottis Gibson, his South African counterpart, ahead of a series which pits two strong sets of bowlers against potentially fragile batting line-ups in a country where conditions usually offer bowlers plenty of encouragement.

The bowling strength of both teams is formidable, despite the lack of what had been anticipated as an intriguing match-up of exceptionally accurate seamers between South Africa’s Vernon Philander and Pakistan’s rising star Mohammad Abbas.

Philander has a broken finger, while Abbas is recovering from a shoulder injury.

Abbas did not bowl in Pakistan’s win against a South African Invitation XI last week but Arthur did not rule him out of contention for Test selection. Even without Abbas, a pace attack of Mohammad Amir, Hasan Ali and Shaheen Afridi, backed by the legspin of Yasir Shah, will pose a challenge for the home batsmen.

South Africa will also be without fast bowler Lungi Ngidi because of a long-term knee injury but veteran Dale Steyn, needing just one wicket to become his country’s leading wicket-taker, bowled with good pace and rhythm in a recent Twenty20 tournament, as did fellow spearhead Kagiso Rabada.

Duanne Olivier, who will be South Africa’s third seamer, was the top wicket-taker in the T20 league and had match figures of 7/54 in a losing cause in a franchise match last week.

Pakistan’s batting showed familiar frailty when they twice collapsed in the fourth innings in losing a Test series against New Zealand in the United Arab Emirates recently. But Haris Sohail, Babar Azam, Azhar Ali and Asad Shafiq all hit centuries in the same series, while most of Pakistan’s top order were in the runs against the Invitation team.

South Africa have some batting problems, exacerbated by the retirement of AB de Villiers. Opening batsmen Dean Elgar and Aiden Markram, consistent performers in home wins against India and Australia last season, have yet to find top form this season.

Hashim Amla, 35, may be nearing the end of a distinguished career. In 10 Tests since his most recent century, against Bangladesh in October 2017, Amla has hit just four fifties and averaged a below-par 23.36. He was out for a first-ball duck in a franchise match last week, although he made 61 in the second innings.

Captain Faf du Plessis and wicketkeeper Quinton de Kock have been in reasonable form but Theunis de Bruyn and Temba Bavuma did not play in the most recent franchise matches because of back and hamstring strains respectively. 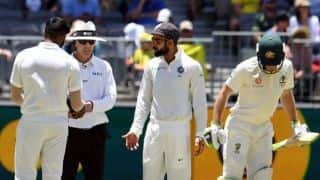