The win though may still not be enough for Tamil Nadu to secure a place in the Super League stage from Group B.

The big boys, R Ashwin and Murali Vijay, stood up and delivered the goods as Tamil Nadu beat Vidarbha in the Round 6 Group B clash of the Syed Mushtaq Ali Trophy 2019 in Surat on Thursday.

Tamil Nadu, though, stuttered in the chase and were reduced to 52/5 from nine overs. However, Murali Vijay resurrected the Tamil Nadu innings scoring 74 off 47 balls and stitched a 68-run partnership with J Kousik, who scored an unbeaten 41 off 35 balls.

This was Vijay s second consecutive half-century after scoring 77 against Himachal Pradesh on Wednesday. However, unlike the previous game, Vijay s knock did not go in vain on Thursday as Tamil Nadu registered a three-wicket win. (ALSO READ: Rahul Tripathi powers Maharashtra to 7-wicket win over Baroda) 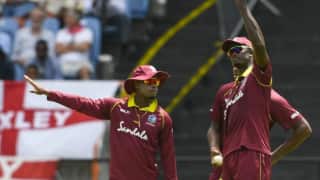 This West Indies side will shock a few people at the World Cup: Michael Vaughan