Trent Boult ended with outstanding figures of three for 19 off four overs.

Hyderabad won by 20 runs
Man of the Match: Trent Boult

A disciplined bowling performance from Sunrisers Hyderabad (SRH) ensured that Kings XI Punjab (KXIP) crashed to a 20-run defeat in Match 27 of Indian Premier League (IPL) 2015 at Mohali on Monday. David Warner and Trent Boult starred for SRH, as KXIP suffered yet another loss. With this win, SRH move up to six points, while KXIP remain firmly at the bottom of the points table. Live Scorecard: Kings XI Punjab vs Sunrisers Hyderabad IPL 2015 Match 27

SRH were restricted to 150, but their bowlers ensured that KXIP would not get up and running early. Trent Boult and Bhuvneshwar Kumar were outstanding with the new ball, snapping up Manan Vohra and Shaun Marsh respectively to reduce KXIP to 13 for two. George Bailey came in at No. 4 and looked in great nick, scoring 22 off 16 balls. Live Updates: Kings XI Punjab vs Sunrisers Hyderabad IPL 2015 Match 27

His dismissal proved to be a decisive moment, as he was out trying to clear the ropes down the ground only to be caught by Karn Sharma off Moises Henriques. Murali Vijay was out soon thereafter, run out after David Miller called him for two and sent him back midway. Vijay was trying to anchor the innings, and had he batted for longer KXIP might not have had it so difficult later on. Miller was unable to make amends, hitting Karn to Boult in the deep. IPL 2015 Highest run-scorer: List of best batsmen in IPL 8

With all hope seemingly lost, Wriddhiman Saha and Akshar Patel kept KXIP in the hunt. The duo added 44 in quick time before Akshar backed away too much and was bowled by Boult. The final nail in KXIP’s coffin came off the final ball of that over, when Saha holed out to Praveen Kumar to end with outstanding figures of three for 19 in four overs. Mitchell Johnson and Rishi Dhawan were not able to do much either, as SRH pulled off a convincing victory. IPL 2015 Highest wicket-taker: List of best bowlers in IPL 8

Earlier, David Warner scored a rapid 58 off 41 balls, but he was not backed up by the the others as SRH could only manage 150. SRH were on the back foot right from the start. Sandeep Sharma continued his good form, and bowled an excellent over to Warner to start the game. Having played out a maiden, Warner hit a couple of boundaries off Mitchell Johnson, who opened bowling for KXIP for the first time this year. However, the momentum was short-lived, as Dhawan was out edging an attempted pull to Murali Vijay at slip. IPL 2015 Most 6s and 4s: List of most dangerous batsmen in IPL 8

Hanuma Vihari made his way in at No. 3 and played a couple of beautiful shots for four, but was ultimately out to an ugly hook for nine. Warner kept going at the other end though, hitting 10 fours and a six in his innings. As long as he was there, SRH were in with a serious chance of getting a big score. IPL 2015 schedule: IPL 8 match time table with venue details

As soon as he was dismissed — chipping Akshar Patel to David Miller — SRH suffered a massive drop in the run rate. Moises Henriques and Naman Ojha then added 45 runs, but at just over a run-a-ball. The Miller-Akshar combination accounted for Naman soon thereafter, as he was out slogging to the deep. IPL 2015 Points Table & Team Standings

Ravi Bopara did not last long, edging Johnson behind to Wriddhiman Saha for a two-ball duck. Ashish Reddy and Henriques tried to get things going, but Henriques ended up getting bowled for a 32-ball 30 in the 20th over of the innings. However, Reddy was not willing to give up, hitting a couple of sixes in the last over to boost the SRH total to 150. Indian Premier League (IPL) 2015: Complete coverage 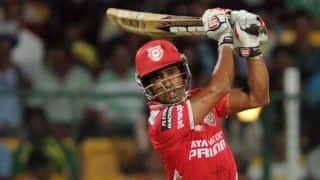 Shahid Afridi: Will quit, if I become a burden for the team