India 'A' spinners turned the game around in the final claiming 8 wickets to put Australia 'A' on the back-foot.

India A’s emphatic win in Quadrangular A Series held in Australia can be considered as a typical Bollywood movie where the hero gets beaten up horribly at the start and then he rises from the ashes and unleashes hell on the villain. The first sentence would suffice India A’s adventure in Australia recovering from a morale-thrashing loss in their first match and then emerging as a tournament-winner. No one could have predicted that India A would bounce back after the humiliating batting collapse they suffered, getting bundled out for a mere 55 in the first match. Australia A seemed to be the clear favourites of the tournament. Despite the ‘A’ status, the Quadrangular series got quite a hype, thanks to Indian players who have featured in Indian Premier League (IPL) and youngsters who have represented the Indian ODI squad before.

Manish Pandey-led India ‘A’ side came back into the series registering one win after another making their way up in the tournament standings by beating South Africa ‘A’ and Cricket Australia’s National Performance Squad (NPS). They almost pulled off a spectacular high-scoring chase against hosts. India ‘A’ fell short of a run chasing a mammoth target 323 in their last league game. A lot was expected for the side with their head coach Rahul Dravid mentoring them on Australian soil.

The tournament saw a few players emerging and binding a promise for the future of Indian cricket team whereas a few could not get rid of their bad-run and wasted away a chance to prove themselves. Let us take a look at the performance assessment of the India ‘A’ players as the tournament ends-

Faiz Fazal (1/10): The experienced opener, Faiz Fazal could not repay the faith of the selectors as he scored just 45 runs in the four matches he played. After hitting a half-century in the debut match on Zimbabwe tour, a lot was expected from Fazal but he failed to capitalise on the opportunity as he was eventually dropped out of India ‘A’ side after back-to-back poor performances. He was called upon in the side in the last league game but could not deliver the goods and departed for 12.

Mandeep Singh (7/10): Mandeep had a horrendous start to the campaign getting out on a golden duck by Chris Tremain. He was dropped from the side after a couple of failures. He was picked up again in the side after one game but could not perform well until the last league game where he scored a half-century. Mandeep seemed to be in the same form in the final scoring 95, laying the foundation for a big total after first wicket falling early on in the innings. He ended the tournament on a high as he saved the side from a batting collapse.

Karun Nair (6/10): Nair had a mixed bag of a campaign as he could only score a single half-century. He could only score 126 runs from 6 matches which cannot be considered as  impressive. However, he performed a key role in the final taking 2 crucial wickets. Nair got rid of wicketkeeper-batsman Cameron Bancroft and Nick Maddinson in their 30s when they were starting to break free. Those two wickets can be considered as one of the major defining moments of the game.

Shreyas Iyer (6.5/10): Iyer had a decent campaign in Australia scoring 165 runs in five matches. He got the starts on few occasions but failed to convert them into big scores. He also scored a half-century which proved to be vital for the game against NPS, helping his side to chase down the target quite easily. Though, at international-level players are expected to build on starts and score centuries, and Iyer needs to improve on that.

Manish Pandey (c) (9/10): Pandey had a great tournament leading the India ‘A’ side. He had a good experience earlier this year while playing for India’s senior team on the tour and winning the final ODI. He was able to score 2 centuries and score 359 runs at an average of 59.83 which also included an half-century. He was able to built partnerships when needed and attacked the bowlers when needed the most. He displayed temperament when needed to get the team out of crunch situations. Pandey’s bowling changes too were up to the mark, his master-class plan to bring back Dhawal Kulkarni in middle overs in the final paid off as he got a breakthrough right away. Pandey also recieved the Man of the Series award, and will be among the favourites to be picked up in Indian side against New Zealand in home series.

Kedar Jadhav (8/10): Kedar Jadhav improved a lot after a couple of unproductive games as he went on to score two half-centuries in the tournament which includes unbeaten 93 against NPS. Jadhav managed to score 254 runs in 7 matches at an average of 63.50. He had a good run on Zimbabwe tour as well but his place looks unlikely in ODI squad with MS Dhoni and KL Rahul present in the team. Jadhav was the highest run-scorer for India ‘A’ in the series.

Sanju Samson (7.5/10): Sanju Samson too, took some time to settle on Australian pitches. After a few games Samson regained form and scored two half-centuries in the series. His contribution in the last league game while chasing 323 was commendable. Samson stayed till the last over but could not finish it as he got out with one ball to spare. Samson scored 147 from the five innings he batted on.

Hardik Pandya (1/10): Pandya’s performance in the series can be termed as the worst among the lot failing to perform with both bat and ball. Pandya played each and every game but still could not adjust to the pitch conditions and deliver. He could only manage to score 47 runs from 7 matches out of which he got a chance to bat in five. His bowling was not impressive either as he could only manage 5 wickets in the series. It will be tough for the all-rounder to get selected in ODI squad in near future.

Akshar Patel (6/10): Akshar Patel’s performance can be considered as a decent one given the fact that he played five matches in the series. He only got three chances to bat in the series and tried to deliver with cameos. Patel was the lone batsmen who could score in double digits when India ‘A’ bundled out for 55. He picked up 5 wickets which can be considered as satisfactory, given the fact he is bowling on Australian pitches.

Jayant Yadav (4/10): Jayant Yadav did not get much chance to bat so it will be cruel to assess him on his batting skills given that he is a bowling all-rounder. Yadav could only manage to take one wicket of the four matches played as well which cannot be classified as satisfactory at all. Though, his economy rate was impressive, his performance does not qualify for a berth in the senior side.

Dhawal Kulkarni (9/10): Kulkarni put on a brilliant performance throughout the tournament. He ended up being the leading wicket-taker for India ‘A” claiming 9 wickets in 6 matches only second to Chris Tremain. His batting skills were also commendable as he shared 47-run partnership in the second match alongside Pandey to get the side to the target. With his performance in the Quadrangular A series, he is in contention for a spot in the senior side.

Varun Aaron (6/10): Varun Aaron featured only in three matches out of which he did not bowl in one as it was washed out due to rain. He got 3 wickets in the first game he played but proved to be expensive in the next game against Australia ‘A’. Perhaps, more chances would have given us more to analyse his perform in the recent past.

Jaydev Unadkat (6/10): Unadkat’s performance can be considered as a decent one as he claimed 6 wickets in the 5 matches he played out of which he did not get to bowl in one. He played a crucial role in the third match taking 3 wickets and enforcing a batting collapse from NPS.

Yuzvendra Chahal (9/10): Chahal’s spin got the better of Australian batsmen as he ended the campaign with 7 wickets in 4 matches, India A’s leading wicket-taker after Kulkarni. In the final he picked up 4 wickets. Chahal first got rid of the middle order and then contributed to the batting collapse by moping up the tail quickly. He ended the game with 4 for 34 in 8.5 overs. He also had a good run on Zimbabwe tour, he might be considered in the squad strengthening the bench strength against New Zealand. 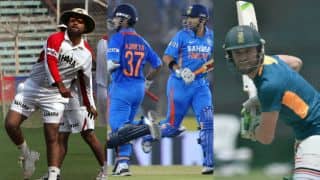