Whilst plenty of batting records might be broken, New Zealand's tour to India will be a Test of the bowlers.

Indian cricket fans, are always looking forward to cricket at home. The pre-match build-up, makes them impatient, a tad exuberant, and obviously hopeful that the Indian team will live up to the expectations. India’s home season is about to begin. New Zealand, have arrived as visitors in what will be a long Test campaign in the year to come. While both sides have some great talents in their team, India, under Virat Kohli, will be favorites to win the three-match Test series. Nevertheless, the series will be still closely watched despite India having a dominant Test record against the Kiwis. Indian fans and Kohli’s men, can doubt the skill of Kane Williamson’s men, only at their own risk.

Whilst plenty of batting records might be broken, huge number of runs might be piled up, the India versus New Zealand series will also be a Test of the bowlers; bowlers who will write their name in history, with four-for’s, five-for’s and nothing but just wickets in their bag. And history has seen a number of them rise to the occasion. From India’s point of view, a side that rely on their batting prowess; spin and seam bowling will have a big role to play. India’s spinners have done well on sub-continental conditions and they would want to keep it the same way. The seam attack will have to play the supporting role.With that in mind, let’s walk through some of the most memorable spells for India in Tests against New Zealand, and cherish some magic from the glorious past. FULL CRICKET SCORECARD: India vs New Zealand, First Test, at Kanpur

A right-arm off-break bowler, Venkataraghavan owned the four-match Test series against New Zealand in March 1965 at home. He took 21 wickets in the series and his spell in the first innings at Delhi against the Kiwis was exceptional. Bowled leg-before wicket, caught, he got them out every which way. He bowled 51.1 overs, 26 of them maidens and kept the run-flow nice and tight giving away 1.40 runs per over. His figures remain the best by an Indian against New Zealand in an innings.

Another right-arm off-break bowler, Prasanna was since 1967 Mansoor Ali Khan Pataudi’s main weapon. He, was a master in disguise, a very clever spinner. At Auckland in January 1976 when India were playing in the first of three Tests against the Kiwis, he took his best ever bowling figures that of 8 for 76 in the hosts’ second innings. He bowled only 23 overs. At a point in that spell, he had taken five wickets for six runs, of course with the help of some fine fielding and the Kiwi batting that lacked application and spirit. READ: EAS Prasanna: The off-spinning magician!

A leg-break googly bowler, Gupte was a world-class spinner. His googly was very difficult to read. When New Zealand toured India in 1955, he claimed 7 for 128 in the Kiwis’ first innings. The match ended in a draw but will be remembered for a double-hundred from Polly Umrigar, four other centuries and of course Gupte’s spin heroics. But most importantly this was the first Test played between India and New Zealand and saw a high-scoring contest, unfortunately in no one’s favour. READ: Subhash Gupte: The leg-spinner Garry Sobers rated above Shane Warne

Called ‘best in the world’ by India coach Anil Kumble, India’s spin bowling all-rounder Ravichandran Ashwin will have fond memories of him doing well against New Zealand in the past. He took 6 for 31 and 6 for 54 against the visitors in the first of a two-Test series when they toured India in August 2012. His performance resulted in India’s win by an innings and 115 runs in that match. They took a 1-0 lead and went on to make it 2-0 at Bangalore. He got Ross Taylor out twice in that game. You can bet, he would be fancying getting him again once the Test series gets underway. READ: Ravichandran Ashwin: Recap of the all-rounder’s Man of the Series performances

PS: He could be India’s trump card this season.

A slow-left-arm orthodox bowler, Bishen Singh Bedi was a consistent wicket-taker for India. It was tough to pick his deliveries, mainly because his variations in flight, pace, loop and turn, all looked same when it came out his hands. In the first Test at Bombay of what was a three-match series drawn 1-1, Bedi claimed 6 for 42 to stop New Zealand chasing a target of 188. He bowled with an economy of 1.36 in the second innings and was instrumental in taking India to victory in a low-scoring contest. READ: Bishan Singh Bedi: The man who turned left-arm spin bowling into a fine art

One of the game’s most economical bowlers, Bapu Nadkarni was very precise in his line and length. Against New Zealand in 1968, the third Test at Wellington, he was rewarded with wickets. He took 6 for 43 in the second innings, helped India bowl out the hosts for one short of 200 in the second innings. India took a 2-1 lead after chasing down a 59-run target, thanks to Nadkarni. They later went on to make it 3-1 in the four-match Test series. READ: Bapu Nadkarni: Cricket’s noted economist

One of India’s fastest bowlers ever Javagal Srinath produced what could have been a match-winning performance against New Zealand at Mohali in the first of a three-match Test series in October 1999, just that the game ended in a draw. Despite 20 wickets falling in one and a half days, including India being bowled out for 83 in the first innings, the game was a stalemate. Srinath though picked up 6 New Zealand wickets in the visitors’ first innings. His line and length were both highly accurate. India went on to win that Test series 1-0, Kanpur saw them win the only Test.

While Ishant Sharma might have failed to rise to expectations and bars that had been set for him, ever since that tour of Australia where he left his first mark, there are instances of him when he looked top-notch. One such was when he against Brendon McCullum’s side took 6 for 51, in the Kiwis’ first innings, India bowling them out for 192. Despite the visitors scoring 438 in reply, thanks to a Ajinkya Rahane century and India leaving the hosts at 94 for 5, the result still could not go in MS Dhoni and co. favour. Ishant went wicketless in the second innings as McCullum hit a triple hundred, supported by BJ Watling and Jimmy Neesham’s hundreds. A 435-run target could never been possible with so little time remaining in the Test, but Kohli did have enough time to get to a century. The match ended in a draw. India lost the series 1-0. A 40-run loss at Auckland proved decisive.

Here’s how Sharma put New Zealand on the back foot in the second Test, in 2014. 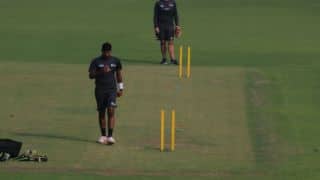 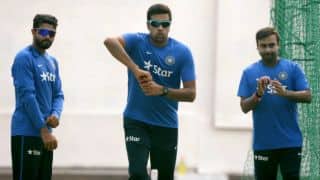