Former Australia fast bowler Mitchell Johnson believes that Tim Paine and Justin Langer must play Mitchell Starc in the second Ashes Test at Lord’s this week, on the basis of the iconic cricket stadium’s slope, and backs Peter Siddle to play all five Ashes Test matches.

In Johnson’s view, Australia should drop James Pattinson for Starc, who sat out the Edgbaston Test, because of the 2.5 metre drop at Lord’s which he feels will aid Starc, who in two World Cup games there this summer took nine wickets.

“I’d go for Starc and probably have Pattinson out,” Johnson, Australia’s fifth most successful bowler in Test cricket, told cricket.com.au. “As much as I want to see [Josh] Hazlewood go well you can’t drop Sidds [Siddle]. He’s been really useful and especially on the slope I think he’d be very good and he just backed up [Nathan] Lyon really well. And [Pat] Cummins is in his own little world, just leave him be.

“It’s hard to change a winning side but I’d like to see Starc still come charging in. The slope comes into it, big time. Left-armer, bit of a different angle. We saw in the last Test the [Australian pacers] coming around the wicket a fair bit I’m not too sure about that. Someone’s got to stay over and one around to left-hand batters. So maybe a left-hand bowler would be ideal.”

Siddle, 34, was named in Australia’s XI for the Edgbaston Test ahead of Starc and Hazlewood. On day one, he scored a vital 44 while adding 88 for the ninth wicket with Steve Smith, and then took 2/52 from 27 overs as England were kept to 374 in their first innings.

After a second Smith century helped Australia set England a target of 398, Siddle was promoted from first change to open the bowling and sent down 12 wicketless overs for 28 runs.

Though he did not manage a wicket last Monday, Langer backed Siddle to play at Lord’s while terming his day five spell at Edgbaston as “the best none-fa I’ve ever seen“.

Johnson was also impressed by his former team-mate.

“I actually think Sidds is a real weapon and I wouldn’t be surprised if he played every game this series,” he said. “Just after how I saw him bowl in that first [Test].

“Thinking about last time we were here in ’15 he could have been really handy on some of the pitches we played on like Notts, I think he was pretty close to playing that one. Just those things and the experience of him and being here and playing. I think he’s giving it his last run as well so he’s got plenty of energy, he really wants to go out there and enjoy it and that really helps as a player.” 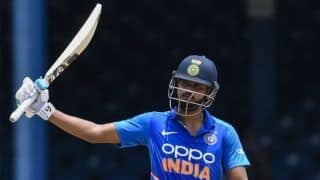