In his seven Test innings as an opener, Usman Khawaja averages 96.80.

Usman Khawaja will lead Australia in place of Test skipper Tim Paine for the three-day tour game versus English county side Derbyshire from Thursday, but remains non-committal on whether his promotion to open the innings is a portent of things to come in the fourth Ashes Test next month.

Steve Smith is set to feature in the game after missing the Leeds Test after he was concussed by Jofra Archer at Lord’s, and should he be passed fit for Old Trafford it would mean dropping one batsman.

Khawaja, who will begin his Australian captaincy by opening against Derbyshire, could not say for certain what Australia’s top order will look like.

“I’m not really sure at the moment, because Smithy is in there too, trying to get a game,” he told reporters in Derby on Wednesday. “Mitch Marsh obviously hasn’t played a lot of cricket, so he’s batting up the top of the order too.

“Marnus (Labuschagne) might get a few overs as well, bowling his spinners which I’m always reluctant to do just to annoy him. But at the moment, it’s just about some guys going out there, playing some cricket, worrying about this game, getting ready for the next game and whatever’s out of our control, just leaving it at that.”

The rookie Marcus Harris replaced Cameron Bancroft for the third Test, and made 8 and 19 as opener. The other candidate to be dropped, should Harris be retained, is Matthew Wade who after his second-innings hundred at Edgbaston has made 6, 1, 0 and 33.

Marnus Labuschagne who came into the series at Lord’s as international cricket’s first concussion substitute has batted thrice in the series and crossed 50 each time. The joint vice-captain Travis Head has one fifty from six innings, but should keep his place for Old Trafford.

“I actually feel really good batting, I just haven’t made any big runs lately which is obviously frustrating for me,” he said. “I’m actually getting lots of starts, it’s not like I’m in no-man’s territory. 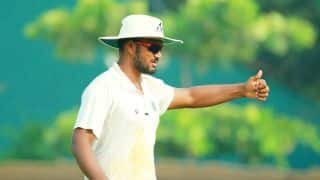