Pakistan can take some heart from that fact that they swept Pakistan 5-0 two months ago in the UAE.

Australia s bowling attack armed with the likes of Mitchell Starc and Pat Cummins looked clueless against India, who batted them out of the game in the first half at The Oval on June 9. It were the batsmen who tried to keep them in the hunt for the most part of the game. However, they can take some heart from that fact that they swept their opponents 5-0 two months ago in the UAE.

With rain expected later on during the match, can Australia return back to winning ways or will Pakistan further endorse their unpredictable tag, or will this turn out to be a damp squib?

Weather: Scattered showers with a maximum high of 15 degrees Celsius

You can also follow LIVE coverage of the match on CricketCountry (SCORECARD: Australia vs Pakistan)

There was a lot of debate surrounding the batting position of Usman Khawaja at No. 4 ahead of Glenn Maxwell, but other than talk of shuffling the batting order, Australia may not look to tinker with their combination.

Babar Azam has delivered consistent performances at No.3 ever since he’s arrived in England. The right-handed batsman will be key to hold Pakistan s innings together should the openers fail to fire against the quality of Australia’s pace attack.

Pakistan have won just one of their last 14 matches against the five-times World Cup winners Australia.

“We have not won many matches against Australia, but we had not won too many against England either. But we have finally beaten England and that has given us a lot of positives. We will go with the aggressive approach we showed against England.” Pakistan captain Sarfraz Ahmed

“Warner needs some more time. He’s a world-class player and will get us off to a flyer. Australia skipper Aaron Finch 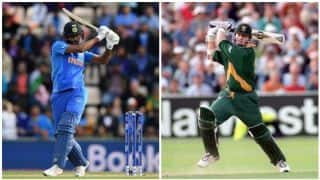