Maxwell anchored the chase and carted six boundaries and two hits over the fence during his 43-ball 56.

Australia allrounder Glenn Maxwell was in ominous form in the opening two-match Twenty20 International series against India, his 56 off 43 deliveries, setting the tone for the run chase as the tourists registered a thrilling three-wicket victory at Visakhapatnam. (ALSO READ: Glenn Maxwell s fifty guides Australia to thrilling three-wicket victory)

Coming into bat after Australia two quick wickets in Marcus Stoinis (1) and captain Aaron Finch (0), Maxwell, who has been phenomenal in the Big Bash League (BBL) this season, anchored the chase and carted six boundaries and two hits over the fence during his 43-ball 56. Opener D Arcy Short provided good support with a run-a-ball 37.

Win is a win obviously. I thought I was able to control in the middle overs. I had a good partnership with D’Arcy, but unfortunately both of us gout out in quick succession which caused a bit of chaos towards the end, Maxwell, who won the Man of the Match award, said at the post-match presentation ceremony on Sunday.

Pat Cummins at the end took his side home after smashing a brilliant boundary past over off Umesh Yadav and followed it up with a brace.

Pat Cummins and Jhye Richardson were excellent in the end. That’s (batting at 4) something I have done well in T20Is and domestically back home in the Big Bash. It’s a position I’m comfortable to bat in. Hopefully, I continue to do well, he said.

Maxwell s innings was brought to an end by Yuzvendra Chahal after he was caught by KL Rahul in the 14th over. Krunal Pandya and Bumrah were extremely hard to get away. I decided to target other players like Yuzvendra Chahal. I was trying to hit another six (on his dismissal), but it was a poor bat swing, I’ll make amends in the next game, Maxwell said. 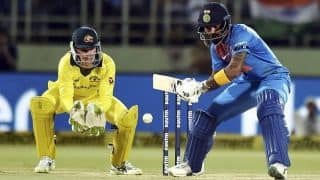 We want to give game time to KL Rahul and Rishabh Pant: Virat Kohli