India in reply, were reduced to 1/3 before KL Rahul and Ajinkya Rahane resisted to finish the day at 58/3, still 406 away from the target.

When a team is out mentally, it reflects on its performance. India s performance on Monday was a classic example of the aforementioned statement. Having already lost the series, minds and bodies tired, India were sent on a leather hunt by Alastair Cook and Joe Root, both of whom struck centuries. England piled the runs – 423/8, the first time the 400-mark was breached in the series, setting Virat Kohli and his team 464 to get.

A series in which their batting has underperformed more than it has clicked, India in reply, were reduced to 1/3 before KL Rahul and Ajinkya Rahane resisted to finish the day at 58/3, still 406 away from the target. And the way it is panning out, India are well on course to tasting a third straight, emphatic defeat at The Oval.

The possibility of a successful chase out of equation, one could have given this Indian line-up the benefit of the doubt to play out a draw, considering the ease at which England batted earlier in the day. But that seems to be a bridge too far at the moment. When they come out Tuesday, barring a miracle, expect England to make it 4-1, with James Anderson looking to best Glenn McGrath with his 564th Test wicket.

He scalped his 562nd and 563rd in the second over of the innings. Round the wicket, Anderson bowled a delivery full and swinging in that caught Shikhar Dhawan stone dead in front of the stumps. Two deliveries later, he sent back Cheteshwar Pujara, the ball holding its line and possibly crashing into middle, to equal the former Australian s tally. The big wicket arrived an over later. India s saving grace in the series, their captain, came forward and edged Stuart Broad to Jonny Bairstow. A first-ball duck for Kohli. For someone who had left the ball so well in the series, played a shot reminiscent to 2014.

Rahul and Rahane then saw off the swing and seam of Anderson and Broad. While Rahane was circumspect in his approach, the opener batted positively, crunching eight boundaries for his unbeaten 46. In the first innings, Rahul had shown signs of a player high on confidence before throwing away his wicket. Here, India will need every bit of that confidence to help materialise the start into something substantial, no matter how late it s arrived in the series. In the field, Rahul took his 14th catch of the series, the most by an Indian fielder in a series.

The highlight of the day however, arrived in the first half when Cook, playing his final innings, signed off with a century to remember. It needed a bizarre piece of fielding, but Chef had completed his fairytale, a hundred in his final innings for England, his 33rd and last. With two needed to get there, he tapped a delivery from Ravindra Jadeja and scampered for a single, but an overthrow converted it into five. Off came the helmet, up went the big red Grey Nicolls. The Oval was on its feet. It was a delightful moment for Cook, one that he richly deserved.

He became just the fourth player in the history of the game to begin and end his Test career with a century. Cook s century dwarfed everything, even Root s first hundred in over a year. But the England skipper wouldn t mind. Today was all about his idol.

India had to wait 67 long overs before they could snap the massive 259-run stand between Root and Cook. With the two batsmen departing in quick succession, India picked up two more to end the second session with something to show.

Resuming four short of a fifty, Cook got to another landmark. He overtook Kumar Sangakkara for the most successful left-hander in the format and went fifth on the all-time leading run-getters in Tests. With Root, he brought up the 100-run stand inside the first hour as England continued to grind.

The bowling team were hampered by the absence of Ishant Sharma, who had to leave the field due to a sore ankle. In his absence, Mohammed Shami, Jasprit Bumrah and Jadeja remained key. But nothing happened for India in the morning and better part of the afternoon session. In between came two chances for India to send Root back, but both were grassed. Jadeja pitched it short and Root, then on 46, went back to offer a nick, but Rahane slipped a tough chance at slips. Later, six short of a century, seeing Rishabh Pant put diving hindered Pujara s vision at first slip. Barring those couple blips, England batted flawlessly.

Second over of the day, Cook flicked Bumrah to bring up his fifty. Root, on the other hand, was belligerent from the start of the day. Sweeps aside, Root plundered Jadeja down the ground and almost bullied his way to a 14th Test century.

India struck when England looked to be on their way to a declaration. Hanuma Vihari, removed Root and Cook off successive deliveries to add to his impressive debut. Root miscued to deep midwicket, and the next delivery Cook edged to Pant while trying to cut close to his body. He walked off the ground to a rousing ovation, having shaken hands with all Indian players. Post tea, Ben Stokes, Sam Curran and Adil Rashid took toll of a tired Indian attack before Root announced the declaration. 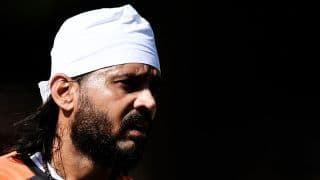 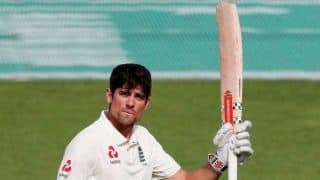