Chasing 153, South Africa chased down their target with 124 balls to spare.

Facing Australia for the first time after the infamous ball-tampering scandal during the Cape Town Test in March this year, South Africa crushed the hosts by six wickets in the first of the three-match ODI series at Perth on Sunday.

Australia entered the match having lost 16 of their 18 ODIs with the side still reeling under the effect of the ball-tampering fiasco which led to the suspensions of Steve Smith, David Warner and Cameron Bancroft.

Australia were bundled out for 152 in 38.1 overs with Nathan Coulter-Nile (34) and Alex Carey (33) the only batsmen who could any resistance.

For South Africa, Andile Phehlukwayo returned with figures of 3/33, while experienced fast bowler Dale Steyn was menacing in his seven overs, picking up 2/18. Lungi Ngidi snapped two wickets in his 8.1 overs, while the other pacer, Kagiso Rabada, returned wicketless.

Chasing 153, openers Quinton de Kock and Reeza Hendricks laid the foundation for South Africa with a 94-run partnership. De Kock missed out on his 18th ODI fifty by three runs after he was picked up by Josh Hazlewood at mid-off to give Coulter-Nile his first wicket in the 17th over. Hendricks departed for 44 off Marcus Stoinis. South Africa were cruising at 122/2 after 22 overs.

Aiden Markram added 36 before he was cleaned up by Stoinis. Skipper Faf du Plessis (10*) and David Miller (2*) helped South Africa chased down their target with 124 balls to spare.

Earlier, after being put into to bat, Steyn’s fiery spell saw the back of Travis Head (1) and D’Arcy Short (0) in the same over as Australia were down 4/2 after three overs. Ngidi then trapped skipper Aaron Finch, who’s going through a terrible run of form, for just five.

Chris Lynn then struck the first boundary of the innings in the 12th over and just as when he was looking to settle down, he was caught behind off Phehlukwayo. Alex Carey kept the scorecard ticking, but he fell after attempting to scoop an Imran Tahir delivery over de Kock’s head.

The dangerous Glenn Maxwell too did not fire on the day and was dismissed for a paltry 11 off Phehlukwayo, who also accounted for the wicket of Stoinis (14).

Couter-Nile smashed five boundaries and one six during his 31-ball 35 but was picked up by Heinrich Klaasen at mid-on to give Ngidi his second wicket.

The next ODI will be played at Adelaide Oval on November 9. 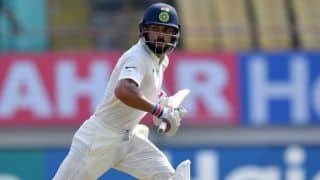