Pujara has been in supreme touch as he became India's highest run-getter with three centuries in their maiden Test series victory in Australia.

Bengaluru: All eyes will be on prolific India batsman Cheteshwar Pujara and Mayank Agarwal in opposite sides when domestic powerhouses Saurashtra and Karnataka take on each other in the five-day Ranji Trophy 2018-19 semi-final starting here from Thursday.

Pujara has been in supreme touch as he became India’s highest run-getter with three centuries in their maiden Test series victory in Australia. (ALSO READ: Test specialist Cheteshwar Pujara brushes off advertisers’ snubs)

Just after the Test series, Pujara played a crucial role in Saurashtra’s quarter-final match against Uttar Pradesh. He cracked an unbeaten 67 in the second innings to help Saurashtra defeat Uttar Pradesh by six wickets. The visiting team also has the likes of Sheldon Jackson in the middle order to provide the much-needed stability.

For Karnataka batsman Agarwal, a good knock in the Ranji semi-finals will help him cement his place in the Indian team. He scored 195 runs in three innings he played in Test series in Australia. (ALSO READ: In knockout games, form goes out of the window: Karun Nair)

The local lad had returned to India a few days before the start of ODI series against Australia after sustaining a thumb injury in the Test series. Subsequently, he missed the Ranji quarter-final match against Rajasthan.

Apart from Agarwal, skipper Manish Pandey, who has been scoring runs, will be looking to continue his good form. Vinay Kumar, Nair and Jaydev Unadkat are the other international players who would like to contribute for Karnataka.

Unadkat, Vinay and Abhimanyu Mithun have been in good form with the ball, while Krishnappa Gowtham is an all-rounder on whom Karnataka can bank upon. (ALSO READ: Kerala spearhead Sandeep Warrier comes out of the shadows of his IPL team-mates) 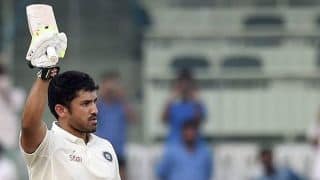