For both teams, the series is an important step towards the ICC World Cup 2019 in England and Wales later this year.

Pakistan will seek a change of fortune when they play South Africa in the first of five one-day internationals at St George s Park on Saturday.

The tourists were mauled in a recent Test series, with none of the three matches going beyond lunch on the fourth day, but have reason to be optimistic in the 50-overs game where fast short-pitched bowling will likely not be a decisive factor.

For both teams, the series is an important step towards the ICC World Cup 2019 in England and Wales later this year.

“We’re certainly a far better white-ball team than we are a Test unit at the minute,” said Pakistan coach Mickey Arthur after the third Test on Monday. (ALSO READ: Time is right to play in Pakistan: AB de Villiers)

That seems a reasonable assessment as Pakistan have shown their ability in one-day cricket, notably when they won the Champions Trophy in England in 2017. Since the start of that tournament, during which they beat South Africa in a rain-shortened match, they have compiled a 17-10 winning record.

Pakistan s batting will be strengthened by the inclusion of Mohammad Hafeez, who retired from Test cricket at the end of last year, and Shoaib Malik, while they have a capable attack in which spinners Shadab Khan and Imad Wasim could play key roles.

Fakhar Zaman, the aggressive left-handed opening batsman, was exposed against the short ball in the Tests, being dropped after scoring only 32 runs in four innings, but has hit 1275 runs at an average of 57.95 in one-day internationals, scored at close to a run a ball. (ALSO READ: Fiery Duanne Olivier feels sorry for Azhar Ali after tormenting him in Tests)

South Africa have based their World Cup plans on picking four specialist bowlers but have yet to settle on a batting all-rounder to fill the crucial number seven position.

They announced a squad for the first two matches only. Since the squad was announced, it was decided to rest wicketkeeper-batsman Quinton de Kock and fast bowler Dale Steyn.

The changes provide opening batsman Aiden Markram with another opportunity to shine in a format in which he has yet to assert himself, while fast bowler Duanne Olivier was rewarded for his man of the series performances in the Tests with a first one-day call-up.

Port Elizabeth usually has one of the slowest pitches in South Africa, which should suit the tourists. In their most recent appearance at the ground, in November 2013, they clinched their only one-day series win in South Africa. 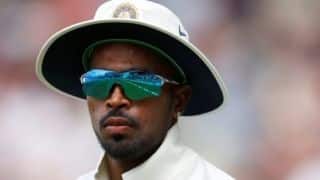