In fairness, a scoreline of 4-1 to England does not reflect how well India played across five Test matches in England. What it does reveal, however, is the fact that their batting is very suspect overseas and that they have had problems bowling to England s lower order.

Here is a report card on the players that featured in the Test series for India.

There was Kohli the batsman, and there was Kohli the captain. As batsman, he was leagues ahead of his team-mates. Banished the memories of 2014 when he made 138 runs in 10 innings, becoming the most successful Indian batsman in a Test series in England. Scored 200 runs in the first and third Tests, with exceptional hundreds in each. Featured in each of India s three century stands, as well as one of 92.

As captain, Kohli lost five tosses, made some poor tactical calls and misread the conditions in three Tests. Went with one spinner at Edgbaston when two were needed; went with two at Lord s when pace was the need of the hour on a damp surface. At Southampton, stuck with R Ashwin when he was clearly unfit, delayed the new ball and then, having waited too long to introduce Hardik Pandya, he bowled him for nine overs on the trot when the new ball was desperately needed. On day two at Kia Oval, Kohli began with the day with a spread field to allow Jos Buttler and Stuart Broad pick up easy runs, which resulted in England getting to 332. Was more reactive than proactive, which added to a series loss.

He caught well at third slip, except for in England s first innings at Kia Oval when he dropped a low catch, one-handed.

India s highest wicket-taker of the series benefitted from a county stint with Sussex during the IPL. Was better than he was in South Africa because of the help from the conditions, and his around-the-stumps angle proved very tough for England s left-hand batsmen. Took five in an innings at Edgbaston, but the went awry at Lord s when India really needed their most experienced player to have a field day. Was very good during the win at Trent Bridge and then added four more at Southampton. Injured himself during the last Test, which meant that India were a bowler down when England batted a second time. Could Ishant have done more? Of course. Can he be faulted for not trying? No.

A stop-start series, but still India s second-highest run-getter. Was left out at Edgbaston, then got a chance at Lord s where he ran himself out for 1 with some help from Kohli and then, after batting 87 balls, was bowled for 17. At Trent Bridge, was out hooking to long leg minutes before lunch but redeemed himself with a crucial 74 to help India win. At Southampton, Pujara scored his first Test century in England, a superb 132 not out to help India get a slender lead of 21. Ended the tour with a whimper at Kia Oval, out for 0 to James Anderson after throwing a way the hard work on 37 in India s first innings.

Made a stunning comeback to Test cricket after injury, helping bowl India to victory at Trent Bridge with a second five-wicket haul in four matches. Followed that up with four wickets at Southampton, where he kept troubling England s batsmen with his pace and variety. Was superb with the second new ball twice. Lost his edge at Kia Oval on a batsmen s track, but ended his second stint as a Test cricketer with his reputation enhanced.

Finished two wickets short of Ishant s tally but there was a marked difference in the two. Shami bowled well in spurts, best displayed at Lord s and Southampton when his intensity never wavered, but overall was not as incisive as in South Africa. Served up too many hit-me balls, too often sprayed the ball down the leg side and then went AWOL with his line on a flat Kia Oval track as Cook and Root ran amok. Three ducks and an innings of 1, which ended with an awful swipe to mid-on when Ravindra Jadeja needed support, did not do India any favours.

Finished India s fourth-highest run-getter despite being far from his best. Struggled at Edgbaston and Lord s, where Sam Curran exposed his itchiness brilliantly. Buckled down at Trent Bridge with a fine 81 (which ended, annoyingly, with an ambitious drive) and at Southampton with 51 in the second innings, only to once again fall as part of a dramatic collapse. Ended with a poor show at Kia Oval, nicking off for 0 and then playing a ridiculous sweep on 37. Dropped catches at Edgbaston, the Ageas Bowl and Kia Oval.

Didn t fare badly, but didn t do anything special apart from in one Test, which resulted in India s only win. Bowled just 10 overs at Edgbaston, where he looked good for his 22 and 31 which consumed 163 balls, importantly. At Lord s, made 11 and 26 and was India s most successful bowler with 3/66. Picked up a career-best 5/28 in one six-over spell in the win at Trent Bridge, and then raced to a run-a-ball unbeaten 52 in the second innings. At Southampton, was not used well as a seam bowler and his batting was poor, with a silly flick off Moeen Ali in the first innings and 0 in the second, though to be fair Pandya got a snorter. Was dropped for the last Test.

Averaged 14.12 before the fifth Test, where 37 and 149 – his first Test century since December 2016- lifted it to 29.90. In his last innings, Rahul doubled his entire run tally in nine previous innings to lift India out of the mire and raise visions of a draw. It was not to be, courtesy a ripper from Adil Rashid.

Don t get swayed by that 149. Rahul had scores of 4, 13, 8 and 0 before he got starts at Trent Bridge, making 23 and 26 before failing to convert. At Southampton, he again slumped backwards with 19 and 0. Holding a record 14 catches was actually Rahul s most significant contribution.

Ashwin claimed seven wickets in the first Test, and his dismissals of Alastair Cook – bowled, both times – were among the best he s has taken overseas. His other wickets included Keaton Kennings, Joe Root, Ben Stokes, Jos Buttler and Stuart Broad. Thereon, after revealing a few of his tricks in a Sky Sports interview, Ashwin managed four in three matches. Picked up a groin strain in the third Test, played the fourth when clearly uncomfortable – the management insisted he was fit – and then didn t play the fifth on account of injury. His batting was overall dependable, and at one stage Ashwin was India s third-highest run-getter. A brainless reverse-sweep off Moeen Ali at Southampton when India needed to buckle down is a sore point, however.

Held seven catches in first Test while becoming the first Indian wicketkeeper to take five catches in an innings on debut. Got of the mark with a six in Tests and looked good in his maiden innings of 24. Thereon, Pant s batting nosedived until his last innings, a thrilling 114 that helped India give England a scare. That is, until he recklessly charged Adil Rashid and miscued to long-off.

Pant s wicketkeeping is a work in progress, with some good catches and athletic leaps to India s fast bowlers who liberally sprayed the ball around. However, a tendency to initially move leg side saw him slow to collect many takes, and his drop of Buttler on 1 at Trent Bridge allowed the batsman score his maiden Test century. A second drop came when Jonny Bairstow shaped to leave and got an inner edge, which hit Pant on the boot. Conceded far too many byes, but that also had to do with some exaggerated movement. All told, the 20-year-old showed plenty of promise and, perhaps most crucially, looked at ease as a Test player.

In four Tests, Dhawan did his chances of selection overseas no good. The same pattern played out across the series: head outside the line, hard hands, feet not to the pitch. The result was five times out edging to the slip cordon. Played for swing in the first innings at Kia Oval and was out lbw to Broad. Dropped two catches at Edgbaston. Still found time to cheer up the Bharat Army with his trademark leg-slaps in the outfield. Tough to see Dhawan go to Australia, especially with teenage batting sensation Prithvi Shaw part of the Test squad.

Four innings, 26 runs, highest score 20, average of 6.50. Out for a pair at Lord s, which lowered his batting average in Tests outside of Asia since the beginning of 2015 to 16.53. Was dropped for the last two Tests, the first time in his 59-match career that the axe had fallen on him.

With 21 runs in four innings, Karthik failed to make an impact. At Edgbaston, he dropped a tough chance and made 0 and 20. At Lord s, he took a very fine catch to deny Jonny Bairstow a century but scored 0 and 1. Was dropped for Trent Bridge as India opted for Pant and did not get a look-in again.

What to make of the most improved Indian bowler in home conditions, but one who cannot hold his pace overseas? Umesh took three wickets in the first Test, but looked average. Could have been different had Dhawan not dropped a catch.. Was dropped for Lord s, unfairly, and did not play again with Bumrah returning to rightfully claim his place.

Warmed the bench for four Tests, then played the fifth when Ashwin was injured and took seven wickets and made a very solid unbeaten 86 in the first innings. What difference might Jadeja have made had he played earlier? It s all conjecture, but his batting in both innings of the last Test showed that India needed competitors like him, who genuinely wanted to get stuck in. Jadeja faced 202 balls in one Test, which is more than what Ashwin faced in four.

Added to India s squad for the last two Tests, the Andhra batsman was handed a debut in the fifth ahead of Karun Nair, who was with India all series. Scored a composed 56 in the first innings, picked up the wickets of centurions Cook and Joe Root and then Curran as England pressed for the declaration, and lastly was out for a six-ball duck.

Played at Lord s on a green surface which rendered him useless. A few full tosses added to the image of a very talented wrist-spinner playing the wrong game. Should prove handier in Australia where the bounce on offer will suit his style more than they will India s finger-spinners. 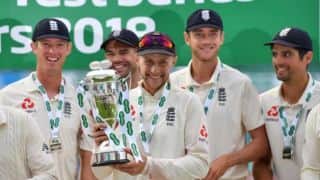