India have made the finals three times, winning twice and losing in 2003. What will 2019 produce?

Since the inaugural Cricket World Cup in 1975, Indian cricket teams have experienced a see-saw ride at the quadrennial ODI championship.

From being overawed in 1975 an 1979 to staging one of global sport’s biggest upsets in 1983 when Kapil Dev‘s team beat two-time world champions West Indies at Lord’s; from losing semi-finals in 1996 and 2015 to crashing out of the first round in 2007; and from heartache in 2003 to exhilaration in 2011, the Indian cricket team has seen it all.

Ahead of the ICC Cricket World Cup 2019 to be held in England from May 30 to July 14, here’s a recap of how past Indian teams have fared at the World Cup.

India were beaten in two of three matches, managing to defeat only East Africa (composed of players from Kenya, Tanzania, Uganda and Zambia) for their first ODI win. It was in this World Cup that Sunil Gavaskar batted 174 balls to score 36 not out.

Kapil’s India arrived in England in 1983 without expectations. In two World Cups they had beaten only East Africa and lost to Sri Lanka, a team yet to be granted Test status. What unfolded was a magical and memorable journey that culminated in a historic day at Lord s, one that put India on the map and forever changed the course of the 50-over game.

India, with just 17 wins in their first nine years of playing ODI cricket, were considered fortunate to just be at a World Cup final. What transpired under Kapil’s captaincy made cricket a global sport.

Now defending champions, India won five of seven matches in the 1987 World Cup which they co-hosted. One of them was the semi-final against England, the other to eventual winners Australia by one run.

The highlight of India’s World Cup campaign was the win over New Zealand, in which Gavaskar scored his only ODI century and Chetan Sharma took the first tournament hat-trick.

A poor World Cup in Australia and New Zealand for Mohammad Azharuddin‘s Indian team, who won just two of eight matches. A humdinger against Australia saw India fall agonisingly close, but giving their fans plenty to cheer about was victory over Pakistan at the SCG.

Co-hosts again, Azharuddin’s Indian team lost to Australia and Sri Lanka in the league stage, rallied to make the quarter-finals, beat Pakistan in another Indo-Pak epic, but came undone against Sri Lanka in a crowd-marred semi-final.

A shaky start to the World Cup in England meant that India were always playing catch-up. Defeats to South Africa and then Zimbabwe were followed by their first win, over Kenya, in which Sachin Tendulkar hit a memorable hundred after his father’s death.

Then came a run-fest at Taunton, in which Sourav Ganguly and Rahul Dravid re-wrote the record books, and victory over hosts England. But losing to Australia and New Zealand dashed India’s chances of going further.

Now captained by Ganguly, the Indian team’s campaign, barring the final, was the stuff of dreams. Having lost to Australia early on, India strung together a memorable run of 10 wins from 12 matches until they ran into Ricky Ponting’s team again.

The fast bowling was overall very efficient and the batsmen lived up to expectations. Their win over Pakistan was one for the ages and extended their dominance over their geographical neighbours to a fourth World Cup. In short, India were too good for everyone bar Australia.

Sachin Tendulkar swept the Man-of-the-Series prize for his 673 runs in 11 matches.

India promised much in the 2007 World Cup in the West Indies, but losing to Bangladesh at Port of Spain in their opening match left them stunned.

Needing to win their next two matches to stay alive, Dravid’s team smashed minnows Bermuda and then lost to Sri Lanka to crash out.

India came into the World Cup billed as favourites and duly lived up to those expectations, though their captain MS Dhoni admitted after it was over that the entire team had been twisted into knots of anxiety due to the pressure.

In the quarter-finals, India overcame defending champions Australia to set up a tantalising semi-final in Mohali. There, they stifled Pakistan s challenge to set up an all-Asia final in Mumbai. The grand finale, played out in front of a spanking new Wankhede Stadium with politicians and Bollywood s glitterati in attendance, saw India beat Sri Lanka to lift the World Cup trophy after a 28-year gap.

Dhoni’s team entered the 2015 World Cup held in Australia and New Zealand in the middle or poor form but transformed themselves, thanks largely to the fast bowlers. Seven wins in a row took India into the knock-outs, where they lost to eventual winners Australia in the SCG semi-final. 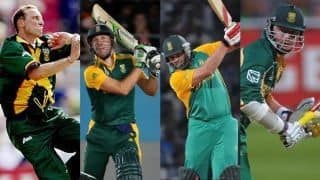