Narula: Historic series win will be a launchpad for India

Analysis: India 2-1 Australia: How the series was won

Quotes: We honestly felt coming into this series that in Australia, we could beat India: Tim Paine

Quotes: This win is as big as the 1983 World Cup win: Ravi Shastri

Quotes: Never been more proud of a team than this one: Virat Kohli

News: Not India s fault that Australia was without Steve Smith and David Warner: Sunil Gavaskar

Kaushik: Kuldeep Yadav has shown that he is no flash-in-the-pan, no one-trick pony

Quotes: After Lord’s, this performance will give him lot of confidence: Bharat Arun on Kuldeep Yadav

Quotes: Australia will fight to save the Test: Peter Handscomb

Reactions: There s no desperation in the Australian team: Ricky Ponting

News: I didn t put runs on the board, so was not selected in Australia s ODI squad: Chris Lynn

Kaushik: Virat Kohli takes strides as a tactician as India close in on series

Analysis: The best and worst from Day 3 of Sydney Test

Quotes: Not being able to convert starts have hurt us: Marcus Harris

Kaushik: Cheteshwar Pujara fusing the mechanical with the all-too-human

Narula: By batting out Australia in Sydney, India have confirmed their series win, nearly

Analysis: The best and worst from Day 2 of Sydney Test

News: Australia have committed way too many errors in batting: Ricky Ponting

News: “Tim Paine and bowlers were not on same page”: David Saker

Kaushik: Not quite the fairytale KL Rahul would have hoped for

Analysis: The best and worst from Day 1 of Sydney Test

Quotes: We need to bat like Cheteshwar Pujara to put a big score: Marnus Labuschagne

Stats: 1000 balls for Pujara in the series

News: Why are Indian and Australian players wearing black armbands?

Chetan Narula: Will India, on the cusp of history, gamble with their line-up?

VIDEO: To win as a team has been the biggest challenge – Kohli

VIDEO: There are no thoughts about losing this series: Tim Paine

News: Ashwin s inclusion will ease some of the burden on the quicks – Laxman

Info: How to watch and follow the 4th Test live 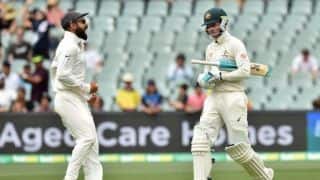